Showing posts from February, 2016
Show All

- February 14, 2016
The attention of Ndi Anioma of Nigeria, the umbrella body covering Anioma people at home and in Diaspora has been drawn to the recent protest associated with a group of people, in the name of Biafra, in which protesters of South East origin are calling for the secession of a separate state of Biafra from Nigeria.  The purpose of this dissent, they have admitted, also relates to the deserved arrest of a UK-based Mazi Nnamdi Kanu, the man behind the venomous Radio Biafra. Like most observers who followed the nature of Biafra in 1967, Ndi Anioma is of the view that Biafra died permanently in 1970 with the surrender speech made by Philip Effong in which he emphatically stated ‘Biafra ceases to exist’, following Col. Emeka Odimegwu Ojukwu's flee to Ivory Coast.  In spite of this circumstance, a few resentful people of South-East origin who are attempting to exploit a non-existent opportunity to make the present democratic dispensation ungovernable, have keyed into MASSOB’s lon
Post a Comment
Read more 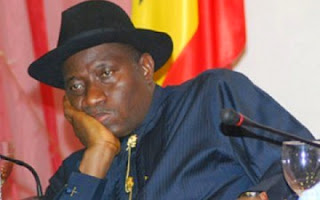 The more I try to push this man into our recent ignoble past and leave him there,  the more he makes a concerted effort at adding salt to the injury he, by his irresponsible leadership of our nation, caused Nigerians. With the revelation of the shameful and disgraceful diversion of funds meant to equip the Nigerian Army and safeguard the nation, one would have thought that the man who presided over that part of our sordid history, should bow his head in shame and apologise to the Nigerian people. But ex President Goodluck Jonathan has no shame. None whatsoever. He is not perturbed that such roguery as is being revealed took place under his watch. No, he sat calmly while those he appointed, played Russian roulette with issues that were a matter of life and death, preferring instead to lace their pockets with funds meant to secure lives and properties. Where was he when  Air Chief Marshal  Alex  Sabundu  Badeh,  a senior Nigerian Air Force officer and former Chief of
2 comments
Read more
More posts